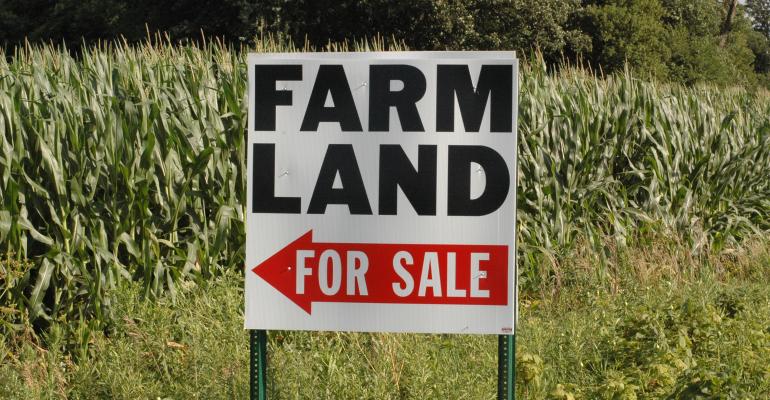 Should Manitowoc County Sell Farmland Near I-43 Over the City’s Objections?

At its upcoming December 18 meeting, the Manitowoc County Board will consider selling 93.48 acres that it owns in the Town of Newton to a private party.  This issue was first discussed by the County Board at its October 29th meeting.  The Board decided to table (postpone discussion on) the issue following public comments by City of Manitowoc Mayor Justin Nickels urging the County not to sell the land, on the grounds that the land is valuable for economic development, and that the nearby Manitowoc I-43 Industrial is almost full.

The Periscope Group will explore arguments on either side of this issue as well as bigger questions involving how much sway elected officials from one municipality can or should hold over governing bodies from another municipality.

First, where exactly is the land that we are talking about?  The area shaded below in white is a rough outline of the 93.48 acres in question, which is actually made up of three separate contiguous County-owned parcels. The road that borders the land to the north is Viebahn Street, and I-43 borders it to the east.  The land is in the Town of Newton.

As the linked Herald Times Report article indicates (and why wasn’t a map included with that article?), Manitowoc County has owned this land since 1941 and has rented it to farmers since 1960.  The farmer that is currently renting the parcel is offering to purchase it from the County for $560,880, or $6,000 per acre.

Advocates of the sale argue that there haven’t been any other offers on the land, over quite a long period of time—The land might not be in big demand.  Also, there could be some philosophical objections to the County owning property when the private sector has expressed an interest in it.

Advocates of the County keeping the property—including Manitowoc Mayor Justin Nickels—insist that the land is far more valuable than the current offer because it is in a prime development location with close proximity to I-43.  Also, the City of Manitowoc I-43 Industrial Park, located nearby, is nearing capacity, and businesses wanting to locate in the area will be looking for land.  Mayor Nickels said that he is working with six businesses that are looking for land in the Industrial Park.   Watch Mayor Nickels offer his opinion here on YouTube.

Let’s first look at both sides of the actual argument.  There is no doubt that land alongside I-43 is valuable, but it’s also hard to argue that this particular parcel has not been in demand.  It if is so valuable, you would think that someone else would have put in an offer to purchase it before now, especially in light of development farther north.

It’s also useful to look at where this parcel is in proximity to the existing Industrial Park. Here’s another map at a different scale.

This time, the County-owned parcel from the prior map is shown shaded in white in the lower right corner,while the rough outline of the Manitowoc I-43 Industrial Park is shown on the north side.  It can be seen that the County owned parcel and the Industrial Park are not contiguous.  Also, the County owned parcel does not have the easy access to I-43 that the industrial park does.  Yes, the County-owned parcel borders I-43,but in order to access I-43, one would have to drive north on Hecker Drive(which includes two sharp curves that would be hard for trucks to negotiate) to Calumet Avenue.  Not impossible by any means, but not nearly as convenient. And—some of the businesses in the industrial park do have to go about just as far to get to I-43.

There is no way of knowing how valuable this land could be,or how in demand it might be at some future time.  Is it the job of the County to speculate in real estate and hold on to this land in the hopes that its value might improve,or does it make sense to sell it to a willing buyer?  Obviously, the risk in selling is that the value will go up, and then the new buyer would be able to sell it and make a profit.  But, it’s also possible that the land will continue to be farmed and will not be developed.

Then there’s the question of how much, if any, sway the desires of the City of Manitowoc should be allowed to exert.  The parcel in question is in the Town of Newton, and it is owned by the County of Manitowoc—two separate self-governing municipal bodies.  It’s true that this parcel is very close to the City limits of Manitowoc, and it’s also true that the City does have some interest in what happens to this parcel—And perhaps the City might have designs on annexing it at some point.  But, for now, it is owned by the County—And it should be the County’s decision whether to buy or sell it.  It has been intimated that, if the City is so convinced of the value of this parcel, then they should purchase it, and that option certainly shouldn’t be discounted.