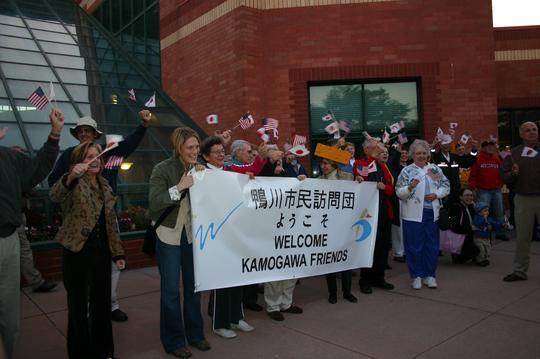 A recent Facebook post asked who pays for the mayor and aldermen to travel to Manitowoc’s sister city of Kamogawa, Japan?  In typical Facebook fashion, responses ranged all over the place and were mainly tethered to speculation and guessing. In typical Periscope fashion, we researched the issue and will present the facts!  This article will be the first in a series.

First, some background on the program itself. The oversight program is called the Manitowoc International Relations Association (MIRA).  It was created in 1993 and its mission statement reads:

“The Manitowoc International Relations Association will act as the liaison between the citizens and officials of the City of Manitowoc and the citizens and officials of the City of Kamogawa, Japan, which have entered into a sister city relationship to encourage international understanding through a continuing program of educational, cultural, and economic exchanges. MIRA will coordinate information and resources to maintain and expedite the sister city relationship with Kamogawa, Japan, and with any international community that has as its goal the pursuit of culture, education and peace.”

This relationship has resulted in several trips where delegations from one of the cities visit the other city.  These delegations typically consist of citizens, elected officials, and students. A citizen/elected official group from Manitowoc goes to Kamogawa approximately three to four years, while student groups go practically every year.  I believe that Kamogawa delegations to Manitowoc have the same approximate frequency. When students from Kamogawa visit Manitowoc, they stay in the homes of people who are affiliate with the program.

Back to the question on where the money comes from to pay for the trips to Kamogawa.  The two accounts that fund the sister city relationship. The first fund (2130) receives its funding from 1.25% of the City’s room tax revenues (approximately $7,000 per year).  These funds can be used for:

∙ Annual expenses include printing, postage, gifts to the delegation

∙ Funding of scholarships for Students to travel to Kamogawa

∙ Costs of a transporting delegation to/from the airport

∙ Other budgeted and approved ancillary expenses associated with the delegation visit.

The second fund (2131) has the following characteristics (any emphasis is part of the original document):

∙ This Account is funded from non-tax levy and/or non-room tax sources, such as private donations. NO city funding what so ever is used to fund a city officials traveling to Kamogawa. The purpose of this fund is to insure that NO taxpayer dollars are expended to fund any City Delegate participating in the program.

∙ Payments from this fund include payments for City Officials and private citizens traveling to Kamogawa. All persons traveling as part of an adult delegation must either fund raise or personally pay for the costs associated with their participation in the delegation.

∙ It is customary to present a gift from the Manitowoc Delegation to our Sister City Officials upon arrival in Japan. This is currently the only expense, which is allowable to be paid for from Room Tax Funds, as part of sending an adult delegation to Kamogawa.

Regarding the first fund (2130), the uses seem reasonably harmless within the guidelines of a sister city relationship.  This, of course, assumes that you think that this is a reasonably use of our room tax, which will be discussed in a minute.  The last two bullets could involve elected officials directly benefiting from the room tax revenue, but we believe that this amount would be small.

More interesting is the second fund (2131).  Private individuals can make donations to the sister city program, and these donations certainly have to go into some sort of fund, so that this fund is used for that purpose makes sense.  Curiously, the verbiage trips over itself to communicate that no (or should we say NO) city funding is ever used to finance an elected official’s trip to Kamogawa. But the first and second bullet points, while not directly contradicting each other, seem rather oddly worded.  If you read more carefully, though, it seems to say that city officials might receive trip funding from these monies, but the funding would be from private donations, not (or should we say NOT) from taxes.

So, if elected officials aren’t completely paying their own way over to Kamogawa, but they aren’t receiving any taxpayer money, where exactly is the money coming from?  The Scope requested a ledger of all of the income and expenditures involved with this fund over the last several years, and that will be reported as soon as we get the information.

While we’re waiting on the funding details, it is fair to ask what the average Manitowoc citizen is actually getting out of this sister city relationship.  There is absolutely no question that people who go on these trips greatly benefit from being exposed to another culture, and feel pride for representing their city in another country.  You certainly can’t put a dollar sign on those experiences, and we don’t want any of what we are about to say to downplay the importance of new experiences, meeting people, or multicultural understanding.

We do think, though, that the number of people who are benefiting from this relationship is limited almost solely to people who have actually traveled to Kamogawa or who have personally met members of the Kamogawa contingent when they come to Manitowoc.  Outside of warm feelings, we can’t think of how anyone else benefits. Have any Kamogawa based businesses built offices or factories in Manitowoc, or vice versa, or have the business communities formed partnerships or strategic alliances that might actually add jobs in Manitowoc?

Now, it is certainly fair to point out that the only tax money that goes to this is a small portion of room tax dollars, so taxpayers aren’t compelled to fund this arrangement.  I think that argument is fair to a point. Let’s look at what room tax dollars are, and what they are supposed to be used for. Room tax dollars are collected from restaurants and hotels and are put into a fund.  The money collected is then doled out according to the following formula: 52.19% to the Manitowoc Visitor and Convention Bureau, civic projects get 43.44%, the city general fund gets 3.12%, and MIRA (the oversight arm of the sister city relationship) gets 1.25%.  In any case, the money is supposed to be used to promote tourism. Does the sister city relationship promote tourism? The delegation of Kamogawa residents and students certainly could be considered tourists. When they’re here, they do sightsee, dine out, etc. It’s hard to know how much of that occurs or if it is helping to draw a larger pool of tourist dollars.

To be fair, there are always going to be gray areas, and some of the benefits are indirect.  For example, room tax money is given to the Capitol Civic Center and the Maritime Museum. Clearly, people come in from out of town to go to shows at the Capitol and exhibits and tours at the museum, but are they eating in our restaurants or sleeping in our hotels, and is our overall tourism environment improving?  Hard to know.