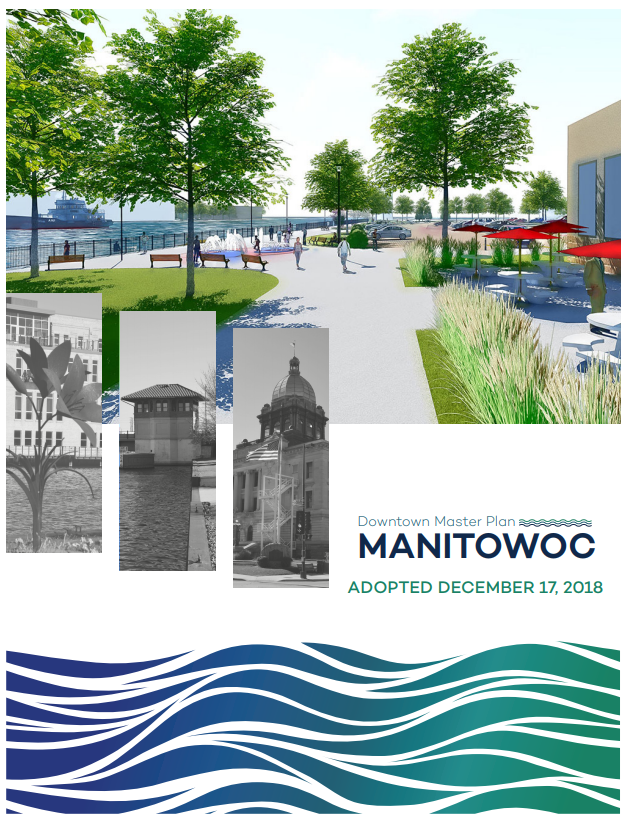 As an interested citizen and a member of THE PERISCOPE GROUP, on another snowy night in Manitowoc,  I visited the Capital  Civic Center, along with approximately 100 fellow interested citizens, to see and hear a presentation from Mayor Nickels and the cities new Community Development Director,  April Kroner, showcasing the latest Manitowoc Downtown Master Plan .  The plan was developed by Kimley-Horn and Associates with the input and assistance of many citizens participating as a steering committee.  Also attending were Aldermen Sitkiewitz, Jeremiah Novak and Lee Kummer.  The new plan was approved unanimously by the Common Council December 17, 2018.  To observe the plan in its entirety, go to:

It is 83 pages in length, has many renderings of possible buildings and land usage, spells out time lines, priorities and is presented as a ten (10) year action plan.

The plan revolves around three identified strengths and opportunities unique to Manitowoc:  Lake Michigan to the east; a navigable and industrial river through city center; a historic perspective to the downtown area.  The theme for the downtown revitalization:  “Live, work and play downtown”.  This will be achieved by not only new buildings and businesses but with improvements for pedestrians, bike lanes, public places and water recreation.

In addition to the presentation of the new downtown plan, the Mayor stated: “We have a lot going for us downtown.”[1]   Here are some updates regarding current and ongoing changes to the downtown that were mentioned:

To accomplish the new Manitowoc Downtown Master Plan, it will take the cooperation of our city leaders, the private business sector, local financial investment and us as individual citizens.  In the past, there have been many plans presented that never seem to be implemented and after spending the money for these plans, they are lying in some file cabinet at City Hall.

Let’s not let this happen with this plan.  We have a lot going for Manitowoc right now.  Let’s keep up the momentum.  Speaking for THE PERISCOPE GROUP, this is a good plan, and as with all plans, some parts are better than others.  But in all, we are in support.

As is the mission and custom of THE PERISCOPE GROUP, we will monitor the plan and shine a light on the progress or lack thereof of the Manitowoc Downtown Master Plan.

P:  The city has had numerous plans in the past; do you think this plan will be implemented?

P:  As a citizen that was perhaps not asked for input, will you support the plan and why?

P:  It has been said that more people want to live “downtown”.  Is this true for Manitowoc?  Will new housing be affordable?  What is “affordable” housing?