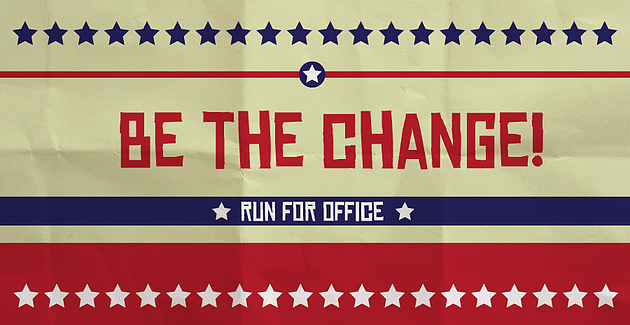 The recent announcement by District 5 City of Manitowoc Alderman Lee Kummer, indicating that he will not seek reelection when his term expires in April, 2020, coupled with the August resignation of District 10 Alderman Bruce Jacobs (who was replaced by Ald. Courtney Pelot) has hopefully put into the public’s conscience that occasionally turnover does occur in local politics!  Nomination papers for local offices–City Council, County Board, or School Board–can be picked up in December in advance of the April, 2020 election. (Not all districts are up for reelection every year.) The explicit purpose of this article is to encourage YOU to run for local office. Yes, you! I know–You’re not cut out for it. You don’t have the time, you don’t know how you’ll be received, a well entrenched incumbent is holding office in your district, you’re not qualified, etc., etc., etc.  Are you really sure? To me, if you’re even reading this, you’re more dialed in to local politics than most people. Sure, that doesn’t automatically mean that you’ve thought about running for office. But. . .I’m betting that it has crossed the mind of more readers than would admit. Am I on to something?

I strongly believe that the reason(s) that people end up deciding not to run for office is because they can’t overcome one or more negative thoughts.  Trust me–These thoughts are normal, rational, and not completely unfounded. That said, they also often buy into some misinformation or misunderstanding, as well as what I believe to be a subversive effort to discourage newcomers from running for office that is quarterbacked by current office holders who do not want to be challenged.  I will organize my article under the headings of the main objections that I hear from many when the topic of running for office comes up. I have also attempted to put them in rank order, with the largest objection coming first and so forth.

Objection 1:  I Won’t Have the Time

I hear this objection or concern most often.  Almost everyone is extremely busy with work, family, and social obligations.  Fitting in a bunch of meetings and other duties just doesn’t seem like it will work.  Fair enough–But how much time does holding elected office really take? The honest answer is, it really depends.   It depends on how much time you want to put in, how much time you need to put in to do the job “right”, and how much time you need to put in that is somewhat out of your control (constituent calls and emails, etc).  If I look back objectively at my 10 years on the Manitowoc City Council, my best guess is that I spent between 5-10 hours per week on Council. This would encompass attending meetings, preparing for meetings and researching issues, handling constituent inquiries and concerns, etc.  And–this is an average. During hot button issues, I spent more time, but during quieter times, probably less–Just like any other job. I have had colleagues who have raised children while serving on the Council, as well as holding demanding jobs, serious family obligations, attending college, etc.  It can be done. And, most of the meetings are in the evening during the week. Finally, meetings have become quite a bit more streamlined over the past decade or so. The full Council only meets once a month, whereas it used to meet twice per month. Documents are downloaded from the Internet, whereas they used to be picked up at your mailbox at City Hall.

Earlier I mentioned that I believe there to be a subversive (and maybe also subconscious, to be fair)  attempt to prevent people from running. A lot of current elected officials will give the impression that the job is really demanding and takes up a lot of time–time that they somehow have, but you somehow don’t!  I think that this stems from, first, human nature–People want others to believe that their job is really difficult and really important. Second–and here’s where the “subversive” part comes in–I’m pretty sure that a fair number of elected officials don’t want anyone to run against them, so they discourage competition by making the job seem too hard, and by overstating the time and effort requirements.  Trust me, the vast majority of you can make the time to do this. And, turning psychology around a bit, could one of the reasons preventing you from seriously considering a run be that you might be overestimating the amount of time that your other obligations take?

In my 10 years on the Council, my colleagues have held the following occupations, among others:  teacher, machine operator, manufacturing supervisor, college student, plumber, county deputy, attorney, retired city employee, human resource professional, hotel manager, maintenance worker, car salesman, home builder, security officer, hospital process improvement professional, nurse, engineer.  There’s a huge spectrum there–Still think you’re not qualified? The most important qualification–by far–is a desire to serve and an understanding of the nature of the job. The very foundation of our nation’s governmental system is based on citizen legislators from all walks of life.

That said, here again I will mention the subversive effort to discourage newcomers:  There’s an attitude that you need several years of experience to “learn” how to be an alderman.  This is true, of course–Just like any other job, you need some time to figure things out. But–the logic of this is really faulty.  That would technically mean that we should never have any new aldermen, because they wouldn’t know how to do the job. This is obviously impossible.  And while there’s plenty to learn, we’re not talking about learning brain surgery or space shuttle design–an interest in government and a desire to serve your district will serve you quite well while you are learning the other stuff.

Objection 3:  My Opinions are Unwelcome/I Can’t Really Say What I Want to Say

Probably the Number One comment that I get from people when they learn that I was on the City Council is, “Oh, I could never hold elected office.  I couldn’t say what I really want to say, and I’d get myself in a lot of trouble if I did.” Fair enough to feel that way. But, can I challenge this?  What forces would be in place that would prevent you from saying what you wanted to say? And what kind of real trouble would you get into if you ended up actually saying it?  Counterexamples aside (like the completely inappropriate and unseemly treatment of former Alder Rhienna Gabriel), you can say pretty much whatever you want if you are elected to office.  You are judged solely by your voters, which is the way it should be. If you don’t believe this, have you seen the outrageous conduct and statements of elected officials at all levels of government?  Even if you disapprove of their behavior, their voters certainly do not, and as long as they are not breaking laws or committing ethics violations and what-not, most seem to keep getting elected somehow.  I’m not advocating outrageous behavior, of course, but I am saying that I find it almost impossible to believe that you would be stopped from saying what you really think or that you’d get in some kind of trouble for speaking your mind.  In fact, most voters would expect you to speak your mind–That’s why they voted for you in the first place.

I witnessed this during my first year on the Common Council (2008-2009).  At that time the tail end of the Police Investigation controversy was still raging.  Det. Swetlik had resigned, but Lt. Puestow was still in limbo. This dragged on and on and there didn’t seem to be an end in sight, and the benefit to the City of continuing the investigation seemed to be negligible.  Recognizing this, I released a statement saying that I believed that the charges against Lt. Puestow should be dropped, a couple weeks after Ald. Brey released a similar statement. Both of us suffered a tremendous backlash from Mayor Crawford and some of our colleagues on the Council, one of whom accused us of an Ethics violation (we were exonerated).  Yes, I got in trouble, sort of, but I felt like I was standing up for the voters, and wasn’t that my job? And I served 9 more years after that, so I don’t think that I was politically damaged.

Objection 4:  Challenging an Incumbent is a Fool’s Errand

It’s hard to challenge an incumbent, to be sure, and statistics favor incumbents by a wide margin, largely due to name recognition and inertia.  Certainly, if would make more sense to consider running for an open position where there was no incumbent to leverage their position. But, that’s not always possible, and incumbents tend to hold on to their seats for a long time–Do you want to wait it out until the seat opens up?

I do think that some of the perceived invincibility of incumbency at the local level is incorrect when one looks at it more closely.  To start, many incumbents are rarely or never challenged, making them appear politically stronger than they may actually be. And, when they are challenged, often the challenger falls short in terms of qualifications, enthusiasm, or vision.

When I first ran in 2008 I ran against an incumbent and, speaking very honestly, I thought I was being naive and I would get killed–but I ran anyway and I won!  I did campaign very hard, yes, but I was also running under the backdrop of the unpopular Police Investigation, which had a lot of voters disgusted with the behavior of City government–I don’t think that a lot of elected officials picked up on this.  My point is, there is a lot of reason to suggest that local government would benefit from some new blood, and if you think that a change in local government is needed, chances are, plenty of other people will too.

I hardly expect you to declare your candidacy now that you’ve read this article, but I am hoping that maybe it will get you thinking a bit harder, or looking at it a bit differently.  The bottom line is, the Periscope Group was founded because of a deep concern about the direction of local politics. We obviously have a perspective that’s not shared by everybody. But it you tend to agree with most of what we stand for, it’s getting harder and harder not to be concerned with what’s going on at the City Council (a small group making all decisions and consolidating power, cronyism, lack of a clear vision, propensity to focus on small issues while ignoring the big picture), the County Board (relentless push to pass a completely unnecessary County Sales Tax), and the Manitowoc School Board (taking more tax money through referenda by convincing voters that it’s “for the children” but with no corresponding measurable improvement in test scores or other academic metrics).