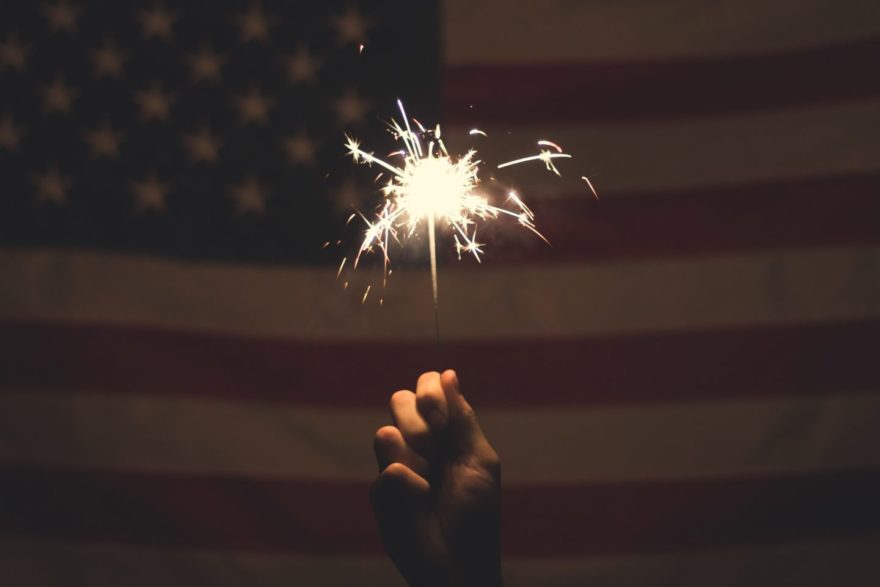 Independence Day has to be among the most glorious–if not THE most glorious–of American holidays.  To start, we wouldn’t have an America without an Independence Day! But add to that the element of celebration and patriotism, the chance to get together with family and friends, and–at least around here–sometimes the first summery weather of the year.  How lucky are we to be American?

Manitowoc is starting to really do a bang-up job of celebrating  Independence Day, and it’s showcasing what a cool place Manitowoc can and should be.  On Wednesday night, the Farmer’s Market lot (soon to be minus the Farmer’s Market–more on that in a future article) was packed for a Vic Ferrari concert, and a fun time was had by all.  On Thursday, the City reinstituted an Independence Day parade, which was very well organized and pleasantly well attended. In fact, The Periscope Group was happy to have an entry in the parade, riding in this snazzy 1951 Hudson Pacemaker convertible:

Yes, these were both great events for Manitowoc.  Yet, in true Scope fashion,without taking away from either of these events, the Scope is going to rain a bit on this parade.

First, remember back in spring when the City Council moved at breakneck speed to install 800 amp service in the Farmer’s Market lot?  At that time some–most vocally Alderman Kummer– suggested that this was done to benefit promoter Brennan Seehafer, who puts on a lot of events on the site and was in the process of developing The Wharf just east of the Farmer’s Market lot–and also was Mayor Nickels’ campaign manager in the 2017 election.  The controversy died down somewhat when it was learned that The Wharf was bringing in its own power and not tapping into the new 800 amp service.

But, aren’t a lot of people who want to watch concerts at the Farmer’s Market lot going to watch it from The Wharf and in all likelihood be buying drinks from the bar?  And, if we’re able to bring in more and bigger acts due to the upgraded electrical, won’t The Wharf benefit despite not using the service itself? Now, you might be saying the Vic Ferrari was already booked and would have been there with or without the 800 amp service.  Fair, but let’s watch what happens going forward with events on this site.

Then there’s the parade.  On Monday, Mayor Nickels made an unusually peculiar Facebook post giving his reasons for restarting the parade tradition. We’ve embedded the entire post here, and I encourage you to read it and draw your own conclusions.

For the purpose of this article, three things were particularly striking.

First is an admitted nit pick.  The post, and many other places, refer to this as the “first” or as the “inaugural” Independence Day parade in Manitowoc.  This is not even close to being true, and is easy to debunk. Yet the media cheerfully trumpeted this as being the first ever.  How hard would it have been to fact check this? Plus, is it a huge surprise that at one time there was an Independence Day parade in Manitowoc?  It doesn’t seem like an out-of-left-field day to have a parade on Independence Day; we’re not talking about Groundhog Day or International Left-Handers Day here!  Certainly, the mayor does deserve credit for taking the initiative to reintroduce this event, but he’s not inventing a time machine.

Second, the claim that this is the first time that the mayor has used his office for himself is, well, um, perhaps lacking just a touch of modesty and a disregard for history?  Here one can’t help but finding a striking and stark juxtapose between the Manitowoc Independence Day Parade, and the Fourth of July event that President Trump headlined in Washington, DC.  In Manitowoc, the mayor has admitted using his own words that the parade is about him, and the Facebook comments responding to his post were overwhelmingly positive. Differently, in our nation’s capital, President Trump’s public comments were focused squarely on heaping praise upon our nation, its history, historical heroes, and our military.  Yet he was roundly criticized by the media for making the event all about himself.

Finally, the mayor’s note at the end of an already curious post was even curiouser!  In this note, the Mayor states that if you are going to complain about the cost or any other aspect of this parade, then you should do it into a mirror or somewhere else where nobody hears you, and please don’t ruin his favorite holiday with negativity.

Yes, this note seems superfluous and exhibits elements of a thin skin, but this is part of a bigger pattern that we have been noticing and have written about before.  That is, you are not allowed to question anything that goes on at the City. If you do, you are opposing progress and are being negative. Shockingly, one alderman even suggested that you move out of town if you don’t agree with what the City is doing!  This argument is absurd on its face. These politicians work for us!

“Shockingly, one alderman even suggested that you move out of town if you don’t agree with what the City is doing!”

My political intuition has been activated for another reason.  It’s becoming obvious to me that the suggestion that you are not allowed to complain has become a talking point among the Mayor and some of his closest allies, and is being used to stifle any dissent.  After all, who wants to be thought of as negative or opposing progress? Dear readers, do not be distracted by this absurd and intellectually lazy talking point. And you just wait–Detractors of this article are going to assert that because we are pointing these things out, the Scope must not support these events.  This even though we plainly stated at the beginning of this article that we do support these events. It’s possible to support something even while questioning how certain things came about.

Following, the Periscope Group wants Manitowoc to be the best that it can be.  We would argue that we are one of the biggest cheerleaders of our great city! Within this context, we want things to be done right, fairly, and for the right reasons.  We clearly have a viewpoint and we alertly acknowledge that not everyone will agree with us, and some may question our motives–that’s your prerogative. We will always welcome and invite constructive criticism and fact-checking, and will admit if we are factually incorrect or hyperbolically inappropriate.  We understood this when we started, and we continue to gladly wear the mantle. We have strived from our founding to provide a voice and a service that simply does not exist anywhere else in our area. Feathers may be ruffled and sacred cows might even be skewered, but we will remain true to this mission. We can’t thank you enough for reading. We wouldn’t be able to do this without you.