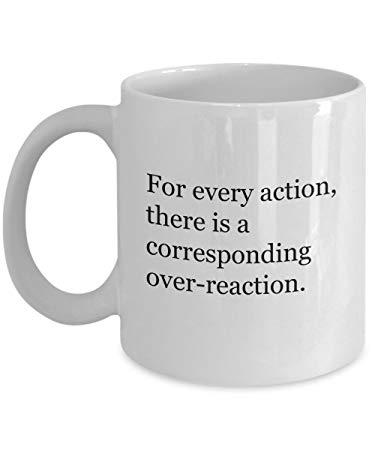 A recent article in the Herald Times Reporter (linked below) once again highlights what is believed to be “bizarre” behavior by Manitowoc Alderman Rhienna Gabriel.  The article—and I’m guessing most readers—seem to focus on the behavior itself, and whether or not it was truly bizarre, and how bizarre!  (Readers of a certain vintage may notice my sly reference to the 1996 song of the same title.)  While that is certainly interesting and appropriate, to me the far more interesting aspect is the behavior that is being exhibited by several elected officials with respect to this matter.  It’s actually quite troubling to see what appears to be going on here:  Several elected officials simply do not like Ald. Gabriel, and they are trying to force her off the Council and/or severely weaken her ability to represent her district.  Unfortunately, she is also giving them plenty of ammunition.

This all started last spring when the Council had a breathtaking overreaction to a case of Ald. Gabriel dropping off at an employee’s home a 6 pack of beer with one missing—how menacing!  At that time they voted to take away Ald. Gabriel’s right to vote at the Committee level—a very harsh punishment that I have no doubt was politically motivated. The Scope wrote an article about this shortly after it happened, so I won’t rehash it here, but the original article can be found at https://theperiscopegroup.org/gabrieland, like all Periscope articles, is definitely worth a read!

Jumping forward to the latest bizarre incident, once again the Council thinks this is very serious, and needs to be discussed by the whole body!  And—They can’t discuss it unless Ald. Gabriel is present, because they have some questions for her that she needs to answer!  This mirrors the Council’s behavior last spring when they voted to take away her ability to vote at committee meetings.  Much of the discussion focused on trying to make Ald. Gabriel explain what her behavior and messages reallymeant.  Yes, this is certainly the most important issue facing our fine city!

My stance here is the same as it was then:  Let Ald. Gabriel’s constituents decide whether her behavior is acceptable to them. Taking action against another aldermen takes power away from the voters who elected her.  If you lived in District 10 and wanted to take action against the aldermen who are trying to damage and weaken Ald. Gabriel, you would have no way to do it unless you moved into the district of one of the aldermen who was trying to take action against her.  That’s absurd.  Let the voters of each district elect their own representative, and let them decide what behavior is proper and improper.

Let’s look at the reason why I think that all of this is happening.  As mentioned before, I believe that several elected officials do not agree with Ald. Gabriel’s method of operation and are trying get her off of the Council, or at least weaken her.  Why is this the case?  It could be ideology, but Ald. Gabriel doesn’t seem to be overly aligned left or right.  No, I think it is because Ald. Gabriel dares to question the status quo.  She asks questions and makes suggestions about how maybe, just maybe, the City could be run more efficiently.  This cannot be allowed and must be stopped.

The elected officials who are doing this are working with the choreographed efficiency of a synchronized swimming team.  This part may get a little wonky, but it is important to illustrate how nefarious this whole issue has gotten.  Consider how this latest letter even got to be a Council issue in the first place. It was a letter written to the privateaddress of another (actually, several other) aldermen.  If this had been sent to City Hall then, yes, it would have become an actionable Council document.  But it was sent to a private address.  The contents were bizarre, but again, not threatening unless you are reading something into it that I’m not.  Yet one of the recipients decided to take this to the Mayor or City Attorney to get it on to the Council agenda.

Even when that was done, it was done so in an initially innocuous way.  It was put onto the consent Agenda with a recommended action of “place on file”.  The Council’s consent agenda is a way to put a lot of uncontroversial items into a single vote.  When the Council votes to approve the Consent agenda, every item on that agenda is adopted with the action that was recommended.  In this case, the action was to place the document on file, which simply means that the Council is acknowledging that they received the document, but are taking no action on it.  This happens quite a bit on Council.

When this comes up at the February Council meeting, it’s interesting to see what happens.  (The recording of the meeting is available on Facebook here.  The item in question starts around the 27:30 mark.)  Ald. Sitkiewitz first requested to have Ald. Gabriel’s letter taken off of the consent agenda.  Then, when the time comes around to discuss it, Ald. Sitkiewitz gives a stern account of the “inappropriateness” of Ald. Gabriel’s actions.  He then motions to table the item (motion seconded by Ald. Brey), because Ald. Gabriel was absent from the meeting.  So, this means it will come back to be discussed at a future meeting, because Ald. Sitkiewitz needs Ald. Gabriel to personally answer questions about the letter.

What is the purpose of this? Why the attempt to publicly shame Ald. Gabriel again?  Couldn’t this have been handled privately?  The Scope is starting to believe that there’s something very naughty going on in the hallowed halls of 900 Quay Street.

Questions for Discussion:
Is this issue serious enough to warrant a stern discussion at the Council?

Should aldermen be able to issue discipline to other aldermen?

What ever happened to the group that sang the song “How Bizarre”?